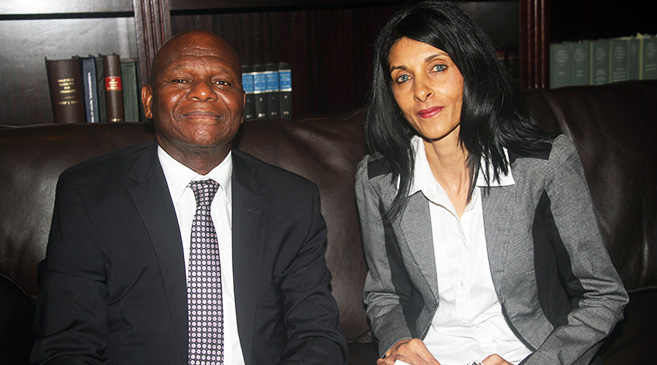 Deputy President of the Supreme Court of Appeal, the Honourable Mr Justice Kenneth Mthiyane reflected on the contribution made by struggle icons Victoria and Griffiths Mxenge to the promotion of access to justice, in an address at UKZN.

Mthiyane was speaking at the 12th annual Victoria and Griffiths Mxenge Memorial Lecture and School of Law Students Awards Ceremony at the Howard College campus. The annual Lecture commemorates the significant role the Mxenges – who were both lawyers – played in the liberation struggle.

Dean and Head: School of Law at UKZN, Professor Managay Reddi, hailed the Lecture as the annual highlight in the University’s Law calendar saying it saluted the ideals of access to justice and the protection of human rights that the Mxenges died for.

Introducing Mthiyane - UKZN Alumnus and retired judge of the Constitutional Court of South Africa -the Honourable Mr Justice Zakeria (Zak) Yacoob told of how Mthiyane had worked alongside the Mxenges in contributing to South Africa’s legal history.

‘What stands out for me about K.K. (Mthiyane) is his humanity and willingness to sacrifice his life for his country. He worked together with Griffiths for many years and they were prepared to die for democracy,’ he said.

Mthiyane encouraged Law graduates to use the knowledge they acquired from their Law degree as a tool to fight for justice and to bring about social change in their communities.

‘Griffiths and Victoria saw it as their duty to ensure that our people had unimpeded access to the court. They lived for justice and freedom and devoted all their lives to achieving a better life for the people they served. To them justice and freedom were inseparable. Such was the contribution made by the Mxenges in empowering people. We are richer for it and are basking in the glory of the legacy they left for us,’ he said.

Mthiyane said it was an honour to deliver the Lecture which over the past decade had been presented by legal icons including Nelson Mandela.

-   Thandiwe Jumo
In This Issue