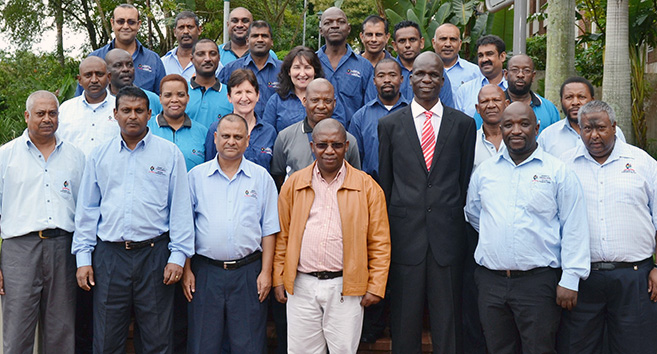 The Registry Department with the Registrar, Mr Convy Baloyi (front, third from right).

The Department of Registry is committed to providing a fast, efficient and secure postal service to the University community.

Registry Manager Ms Tammy Frankland says the 26 members of staff placed across the University’s five campuses have contributed immensely to the Department’s success.

Frankland lists the following as Registry’s greatest achievements to date:

•  Automation in 2007: Registry introduced a fully computerised, bar-coded system allowing thousands of users to log on, register and track their mail. This system has increased accountability by 96%.

•  Running on a zero budget: Registry continue to maintain financial viability by achieving 100% recoveries and operating as a non-profit department.

•  Absorbing the inter-campus courier contract and running the service in-house.

•  Continuing to maintain high levels of service despite a reduction of staff from 61 to 26 since 2004.

•  Entering into agreements with other departments for minimal service fees to provide essential/critical services.

Registrar Mr Convy Baloyi is proud of the team’s efforts and values their dedication to the University.

Frankland, who completed her BA degree at UKZN, has more than 20 years’ experience managing service-oriented centres. She is acknowledged for her ability to troubleshoot issues by evaluating and assessing environments and making the necessary changes to increase operational efficiencies.

Frankland said: ‘Registry has focused on standardising operations to function as one unit to improve service delivery to five campuses in response to UKZN policies. This was achieved mostly through the continuous maintenance of the Registry automated system (the Mail Tracker) which helps to connect and network the UKZN community to Registry services and sees new users being loaded every day!’

According to Frankland, a major contributing factor to the Department’s success story is that many staff members have graduated with degrees and diplomas, especially on the Pietermaritzburg campus. ‘The current supervisor started off as a temporary driver who worked half day. Over the last decade Mr Wonderboy Makhaye has not only worked his way up to Registry Supervisor but has also obtained a Community Development Diploma and graduated this year with a BA and is currently studying towards his BCom Honours degree with the University of KwaZulu-Natal. We are exceptionally proud of his achievements and his continued business input into the Registry environment.’

•  Miss Nana Ngcobo gave birth to a bouncing baby boy in March and is completing her BA degree in June this year.

The Registry Department faces many challenges, including restructuring and their public image. ‘One of the continuing challenges in Registry is to change people’s negative perceptions of Registry from that of thinking about us as purely a post office, to that of an efficient team of people who do a lot with very little,’ she said.