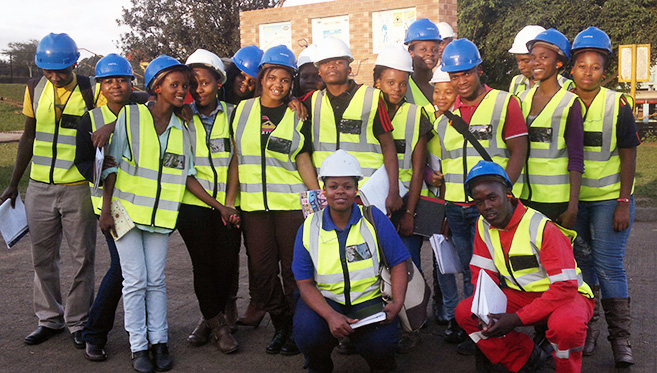 The 2014 Industrial Crop Production Class with their tour guides.

The Industrial Crop Production class doing their BSc Agric honours on the Pietermaritzburg campus visited the Illovo Eston Mill where they saw first hand steps involved in processing sugar from the time the cane is delivered to when the final product is produced.

Sugarcane - one of the many industrial crops studied by Crop Science students in the School of Agricultural, Earth and Environmental Sciences (SAEES) - is also one of the most vital crops to the agricultural industry in KwaZulu-Natal.  As Plant Production scientists, students have to be able to explain and implement the concept that an economically viable crop yield and quality depend mainly on climate, soil and management. This success has to be based on sustainable practices on the farm and in the processing plant, of which the Illovo Sugar Mill is an excellent example.

At the Illovo Sugar Mill, students were exposed to detailed steps involved in processing sugar from the time cane is delivered to the time the final product is produced. It was made clear that sugar production, from the farm to the firm, requires a lot of water and energy, with the emphasis on avoiding waste at all costs.

The major by-products of sugarcane processing are bagasse and molasses. The primary use of bagasse and bagasse residue is for fuel for the boilers in the generation of process steam in sugar plants. It is also used for production of paper, paperboard products and reconstituted panel board as well as agricultural mulch and as a raw material for the production of chemicals. Dried filter cake is used as an animal feed supplement, fertiliser and source of sugarcane wax. Molasses can be used to produce many feed products as well as alcohol.

The students said the trip helped them to better understand the section on sugarcane in the Industrial Crop Production module and opened their eyes to the intricate relationships between agriculture and other disciplines of learning at university, such as Chemistry and Economics.

-   Christine Cuénod
In This Issue