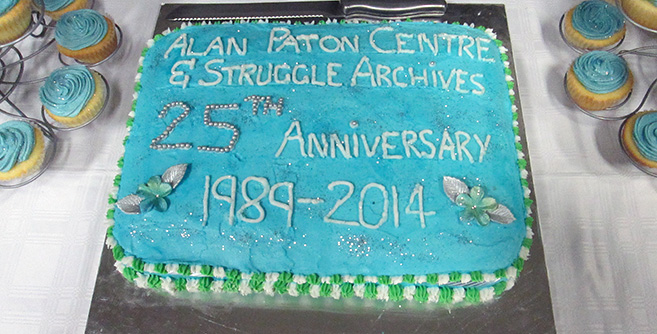 The APC was officially opened on 25 April 1989 by the then University of Natal Vice-Principal, Professor Colin Webb.

In his address, Webb summed up the aims of the Centre saying: ‘The intention is to build up around the core donation from Mrs Anne Paton a study and research centre devoted to the literature and politics of intergroup conciliation – two of the deepest concerns of Alan Paton’s life.  The APC is a facility for the living, an instrument for carrying forward the struggle for improved human relations that filled so much of Paton’s essentially human life.’

A celebratory function to mark the anniversary was held recently in the Leeb-du Toit Council Chambers.

Paton was an educator for 12 years, including a post in the Ixopo district which would later be so movingly described in the opening pages of his internationally acclaimed novel, Cry, the Beloved Country.

In 1936, Paton became Principal of the Diepkloof Reformatory for African Juvenile Delinquents, and it was only in 1948, after the international success of his famous novel, that he attempted writing as a full-time career.

After a few years, however, the conflict between literature and the need for more direct action in a land filled with injustice led him into politics.  He was a founder member of the Liberal Party and remained its President until it was disbanded in 1968 in the face of repressive new legislation forbidding multi-racial political organisations.

Paton died in 1989 and shortly after his death, his widow Mrs Anne Paton made available a large part of the contents of Paton’s study for the establishment of a permanent memorial to him.  The rich core donations included Paton’s manuscripts of his poetry and short stories, his correspondence; and material from the archives of the Liberal Party Head Office in Pietermaritzburg.

Added to this were the documents of organisations which were involved in the struggle against apartheid in the Natal Midlands, such as the Black Sash; the Detainees Aid Committee and the Five Freedoms Forum.  Individuals involved in the struggle, such as Peter Brown, John Aitchison, Harry Gwala, Chota Motala, Randolg Vigne, have also donated their papers to the Centre.