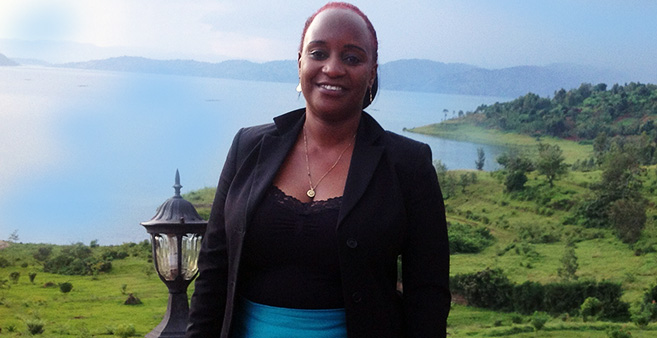 Mrs Clemence Nishimwe of the School of Nursing and Public Health at UKZN has graduated with her Master’s degree in Nursing. Her thesis was titled: “Evaluation of the Effectiveness of Malaria Health Education Program performed by Community Health Workers for Pregnant Women and Children 0-5 years in a elected Primary Health Care Centre in Rwanda”.

In Rwanda, there has been a substantial increase in malaria control activities with malaria health education being one of the prevention strategies in infected areas.

With millions of nets being provided for the population, cases of malaria in 2008 dropped from 772 195 to 227 015 in 2011. Due to a growing population of 12 million people, the mortality rate for children under five was 56 deaths per 1 000 for 2011, with chronic malnutrition being one of the main causes that leave children stunted and with weak immune systems.

Although community health interventions are a way of bringing services closer to the people, thus increasing coverage of basic curative and preventive care, community effectiveness trials are both necessary and feasible in order to make further progress with reducing maternal and child mortality.

Nishimwe’s study, supervised by Dr Jennifer Chipps, aims to contribute to the evaluation of Health education on Malaria control provided by Community Health Workers (CHW) intervention and to establish what elements are necessary for CHWs to be effective in Primary Health Care in Rwanda. It also aims to provide some information on whether malaria mortality and morbidity have been reduced since the formal health education programmes have been introduced.

Nishimwe evaluated the effectiveness of malaria health education interventions given to pregnant women and children aged between 0-5 years by community Health workers at a selected Primary Health Care (PHC) centre in Rwanda. Using a positivist quantitative evaluation research method, there were two components: a descriptive process audit of the Health education programme and a historical control quasi-experimental outcome evaluation study based on a traditional clinic record review.

‘The findings showed that although sufficient nets were being distributed, only half of the CHWs involved in the treatment of Malaria were supplied with adequate medication. There were some concerns regarding the treatment and testing of malaria as the Primary Health Care Centres only provided 20 workers in charge of community based infant illness.

‘With a percentage of the population affected by malnutrition and little access to healthcare and medication, results indicated that there had been a reduction in the rates of malaria in pregnant women and children 0-5 years presenting to the PHC. Overall, the Health Education programme is being implemented as it should be with an adequate number of CHWs who are receiving appropriate selection and training.’

Nishimwe is currently working at Kibogora Polytechnic, Nyamasheke District in Rwanda. She is the Programme Leader of Health Sciences, involved in Administration and Education. ‘My long-term goals involve growing with the Kibogora Polytechnic organisation where I can continue to learn, take on additional responsibilities, and by contributing as much as I can. In addition, I would like to improve the knowledge of nurses and midwives to ensure better service for the future health of the community.’