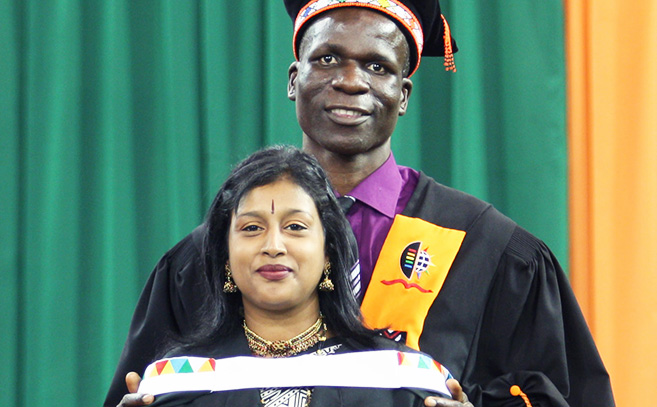 New Study on Telemedicine within the Public Sector

Ms Shivani Naidoo, a graduate with a Master of Medical Science specialising in Telemedicine, has graduated using a study of telemedicine as the basis for her dissertation.

Her thesis was titled: “A Review of Telemedicine in the Public sector of South Africa”.

The aim of Naidoo’s study, supervised by Professor Maurice Mars - HOD of Telehealth at UKZN, was to review telemedicine activities in the public sector in South Africa. ‘As telemedicine is an integral part of the National eHealth Strategy which supports the proposed National Health Insurance, there was a need to summarise telemedicine activity in the Public sector hospitals and clinics for future planning.’

‘The last audit on telemedicine activity was conducted by the National Department of Health in 2008, so there was a need to review changes and updates since then.

Naidoo formulated a questionnaire which addressed telemedicine infrastructure, services offered, their use, administration and management of telemedicine. These questionnaires were then sent to people identified by the National Department of Health as either responsible for or leading telemedicine in each Province.

Annual reports, performance plans and strategic plans of the nine provincial Departments of Health (DOH) were reviewed and a literature review of peer-reviewed papers on telemedicine in South Africa was also undertaken. Four provinces had completed the questionnaire but there was evidence of telemedicine activity present in all provinces.

It was found that 131 hospitals and 79 clinics have telemedicine facilities with a further 69 telemedicine units being installed. Another crucial finding was that few DOH have posts or budget for telemedicine. In total, 170 papers were reviewed.

Services were reported in various departments: radiology, dermatology psychiatry, ophthalmology, psychology, orthopaedics, paediatrics, audiology, cardiology, and pathology but the data found on their use of telemedicine activity was limited. The lack of legal, ethical and clinical guidelines for telemedicine and the current stance of the health Professions Council on telemedicine were noted.

Naidoo says telemedicine activity in the public sector is growing, but is fragmented and few provincial Departments of Health budget for telemedicine. There is a general lack of leadership in telemedicine and there is an urgent need to finalise guidelines for telemedicine practice within South Africa.’

Naidoo is currently working as an Administrator in the Department of TeleHealth in Durban. ‘I would love to further my involvement with Telemedicine within the province. Working with Professor Mars and the team from TeleHealth has been a wonderful experience. I had a lot of support and guidance from the Department and would definitely pursue a PhD.’

Being a wife and mum to two young children doesn’t allow her much spare time. ‘However, once a month my colleagues and I set aside a day to give back to the community in various ways including food and clothes distributions. My kids love being a part of this and it gives me a chance to interact with my colleagues outside of work.’