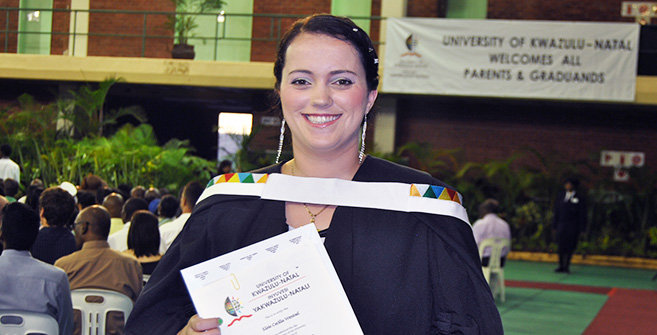 A first in Africa for Ms Elsie Wentzel, Master’s in Sport Science graduate.

Ms Elsie Wentzel, who suffers from two types of dyslexia, graduated with a Master’s degree in Sport Science.

Wentzel’s study, the first of its kind in Africa, was titled: “Effect of a Foot Pump Device on Lower Leg Swelling in Physically Inactive Office Workers”, focused on lower leg swelling in people with desk bound jobs.

She used a device called “StepIt”, The Rocking Foot Pedal, which was developed to increase blood circulation in the legs and to simulate walking and activate the Calf Muscle Pump (CMP) in the lower leg.

The study was conducted in Pretoria where she used the device on 40 subjects. ‘It gave people a little movement in the ankle which stimulated the calf and recorded the effects on swelling in the legs. Leg volume in the test leg was maintained whereas the other leg’s volume increased,’ she said.

According to Wentzel, her research could be used in the everyday life of people with lower leg swelling.

Wentzel owns her own biokinetics practice at a Virgin Active gymnasium in Pretoria. ‘Completing my project was hard since I was working at the same time, but it was worth it in the end. I am exactly where I want to be in my career,’ she added.

She received a lot of support from her mother and her husband through her degree work.  ‘They are my support and my rock for when things get tough. I love life and really appreciate everything God has given me.

‘I have had a lot of challenges in my life and got through all of them a better person. I try to learn from everything in my life. I really enjoy adventure and new things,’ said Wentzel.

Wentzel was at UKZN for a year to begin her degree under the supervision of Professor Andrew Mckune. She returned to Pretoria after completing her proposal development and pilot work to continue with data collection.

Mckune, who initially taught Wentzel as an undergraduate at Tshwane University of Technology, said she was a disciplined, motivated student who submitted an innovative thesis.

‘The study is definitely the first of its kind in Africa and the results were published in the South African Journal of Ergonomics in December 2013. We kept in constant contact throughout her data collection and write-up and so it was not an issue supervising Elsie while she was in Pretoria,’ said McKune.