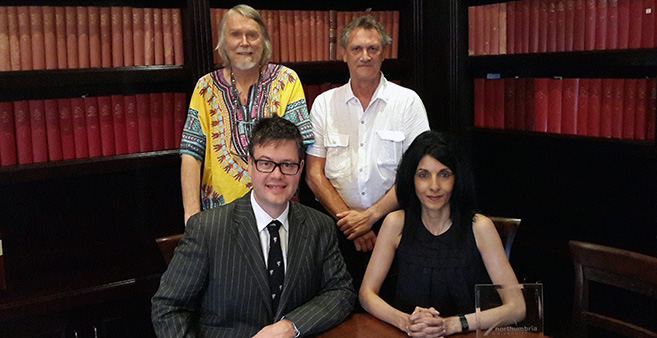 Northumbria University in England and UKZN has signed a Memorandum of Understanding (MoU) - the first step towards what is hoped will become a fruitful relationship between the two institutions.

Northumbria University is the largest university in the north-east of England.  Based in Newcastle upon Tyne, it delivers a wide range of courses to a multi-cultural set of students and has a reputation for excellence.  Northumbria has two campuses in the city of Newcastle and is opening a new campus in London in September 2014.

The Faculty of Business and Law is housed within City Campus East which opened five years ago while their Law School is particularly well known for its work with clinical legal education.  The Student Law Office, the largest of its type in the United Kingdom, was recently given a Queen’s Award, the highest award available in the sector, for its pro bono activities.

Northumbria was represented by Mr Deveral Capps, Director of International Development for the Faculty of Business and Law at the university. Capps first visited Durban and UKZN in April 2013 when he attended the Commonwealth Legal Education Association Conference hosted by the School of Law

He worked with the Principal Attorney at the UKZN Law Clinic, Mr Eben van der Merwe, and the Chairperson for the Centre for Socio-Legal Studies, Professor David McQuoid-Mason, towards the signing of the MoU.

Capps said: ‘I am delighted at the opportunities this memorandum will bring to both Institutions.  We can look forward to opportunities for student exchange, joint degrees, building research links and associated staff exchange too.  I really look forward to visiting Durban in the very near future.’