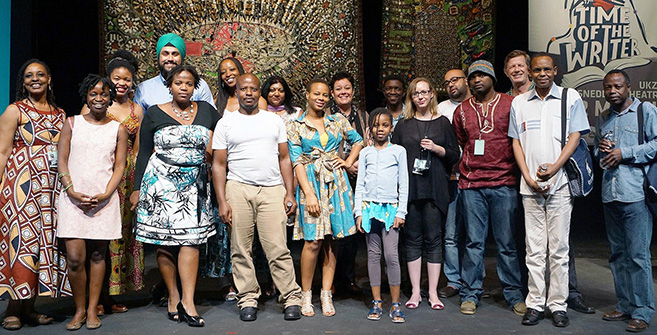 Full House for Opening of 17th Time of the Writer Festival

The Elizabeth Sneddon Theatre on the Howard College campus was packed to capacity for the opening night of the 17th Time of the Writer International Writers Festival.

The week-long Festival is presented by UKZN’s Centre for Creative Arts and made possible through funding from the National Lottery Distribution Trust Fund and other valued partners.

Twenty writers from South Africa, Africa and overseas – at the festival for a thought-provoking week of literary dialogue, exchange of ideas and stimulating discussion – were featured on the night.

Head of the KwaZulu-Natal Department of Arts, Culture, Sports and Recreation, Ms Sibongile Nzimande, said the Department was a proud supporter of the festival and would continue to back it.

The evening was opened by the Deputy Vice-Chancellor and Head of the College of Humanities, Professor Cheryl Potgieter, who spoke on the festival theme "Freeing our Imagination", stating that gay and lesbian rights should be recognised as the current attitudes and behaviour of people were not in keeping with the Constitution. She challenged the audience and festival participants to engage on this issue.

‘This festival reflects the mission and vision of UKZN and I will ensure that the Time of the Writer is brought closer to the academic programmes offered by the College of Humanities,’ she added.

A tribute was paid to the late South African thinker, academic and prolific writer, Professor Mbulelo Mzamane, a past participant of Time of the Writer and former Director of the Centre for Literary Studies (CALS).

Mzamane died on 15 February, having made his mark through his writing and scholarship with titles including The Children of Soweto, The Children of the Diaspora and other stories of Exile and Where there is no Vision the People will Perish: Reflections on the African Renaissance.

In addition to nightly showcases, there were daily activities including seminars and workshops to promote a culture of reading, writing and creative expression.

- Melissa Mungroo
In This Issue