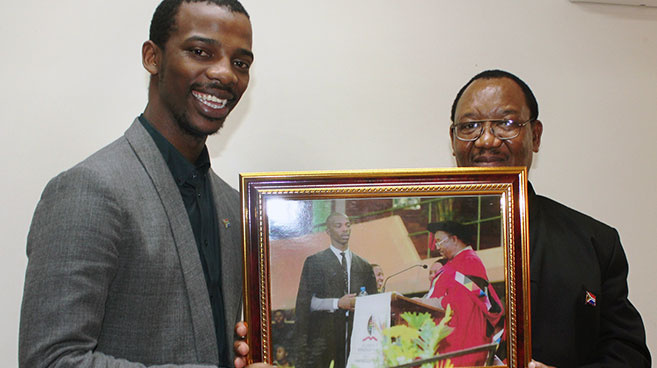 Award-winning South African House musician Mr Zakhele Madida, known on stage as Zakes Bantwini, recently visited the Music Discipline at UKZN’s School of Arts where he graduated this year with a Diploma in Music Performance.

Madida was warmly welcomed by the Dean and Head of the School of Arts, Professor Nogwaja Zulu, and staff and students.

‘We are extremely proud that Zakes was a student of UKZN and we wish him success in all that he does. He is definitely an inspiration to our music students,’ said Zulu.

Madida was overjoyed when he received a framed picture of himself graduating this year. ‘Education is important. It plays a vital role in the music industry where an artist can now engage with the business aspects of the music industry while also being an entertainer.’

Asked about his student days, Madida says he wasn’t given any special treatment and had to meet assignment deadlines and write tests like any other student. He fondly recalls performing at the South African Music Awards but still finding time to write his tests.

Jazz Lecturer Ms Debbie Mari said: ‘I have never had a student quite like Zakes! Mostly because of his touring schedule – he would miss classes often because of this, however, somehow he would get the work done and we’d always manage to make up missed classes when he was in Durban. He never asked for any special treatment - and he never got any - because of who he is in the music industry and he always took responsibility for getting his university work done, even when it took a little longer than usual.

‘Zakes values education and is outspoken about this. It would not be unusual to find a group of music students gathered in a corner, in between lectures, with Zakes encouraging them to work hard, take their time at university seriously and finish their studies,’ said Mari. ‘In this regard, Zakes is a great role model to our students and aspiring musicians who are considering studying music. I wish him every success as he continues his journey in the music industry and we look forward to his next visit.’

Speaking at a lunch function held for him, Madida advised music students to continue with their education. ‘Successful musicians are well-known and they are influential too. As educated artists use your influence to build the Arts into a major discipline and make the music industry a commodity to market internationally. As up and coming young artists, you can change the industry as it’s not only about talent but also about being educated.’