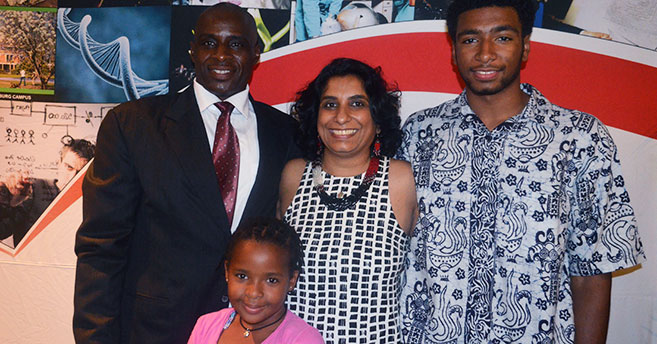 Professor Urmilla Bob and her family at her Inaugural Lecture.

Changing Geographies and the Geography of Change: A Multidisciplinary Journey

The Inaugural Lecture of UKZN’s newly installed Dean of Research, Professor Urmilla Bob - a geographer who is rated among the Top 30 researchers at the University - was delivered at the Westville Senate Chambers on 26 September.

Bob spoke on Changing Geographies and the Geography of Change:  A Multidisciplinary Journey.

In an engaging and wide-ranging lecture that reflected on both her personal and academic journey over the last 20 years, Bob argued that there was an increased recognition of the importance of adopting a multidisciplinary approach in academia.

‘Geography’s evolution as a discipline in recent years has reflected a responsiveness to changing institutional and environmental dynamics as well as changes in disciplinary foci both in terms of the thematic areas and methodological innovations,’ she said.

Bob argued for the research connection between apparently disparate thematic areas such as rural and land issues, business development, renewable energy, mega-events and tourism, gender and violence research amongst others.

She said while the National Research Foundation (NRF) had encouraged her to specialise, she would always remain multi-disciplinary in her approach.  While there were challenges such as a lack of recognition and a weakened disciplinary focus and training, it allowed for blended methodologies, student orientation, teamwork, and a willingness to learn and step out of one’s comfort zone and seize new opportunities.

‘My journey as a geographer has relevance across disciplines as academics and Higher Education Institutions grapple with pressing transformational and developmental demands,’ she argued. ‘My research is underpinned by development and sustainability considerations. Interconnectedness provides new ways of thinking about established fields.’

Bob has conducted research on a range of developmental and environmental issues, including socio-economic impact assessments of developmental projects in relation to conservation and ecotourism projects, as well as sustainable livelihoods in both rural and urban contexts.

Acting Deputy Vice-Chancellor and Head of the College of Agriculture, Engineering and Science, Professor Deo Jaganyi, said that Bob’s home College was very proud of her achievement, and likened the occasion of her Inaugural Lecture to ‘the last graduation of Urmilla Bob’.

Bob dedicated her Inaugural Lecture to her parents, ‘who have worked endlessly and so hard through their lives to ensure that their children achieved their dreams,’ and to her daughter Neeya, ‘who has passed on, and who has made me a better person.’

Bob thanked her husband, Saabir (Dr Edwin Perry), ‘who has never asked me to be anyone but who I am’.   She also paid tribute to her “academic father”, Bill Little of West Virginia University, where Bob studied for her MA and PhD degrees.  She also acknowledged her MA and PhD Supervisor Dr Dan Weiner.  ‘I told Dan that I would like to do research that addressed the needs of the poorest of the poor – that is when I became a rural development person.’

In closing, Bob recognised the institutions and organisations which had helped her along the way and proudly acknowledged her academic and political roots in the former University of Durban-Westville.

Bob paid warm tribute to Professor Albert Modi, Professor Nelson Ijumba, Professor Cheryl Potgieter and Professor Anshu Padayachee for the role they had played individually in her academic career.  She thanked her research collaborators and colleagues as well as her students, from whom she has graduated a large cohort of Masters and PhD students: ‘You are an inspiration, you have made all that I do possible, you exist throughout the world.’

Finally, Bob thanked the communities she researched, ‘because they believe that what we say will come true, that we will use our research to change the world for the better, for the generations to come.

‘I am an optimist, South African and African.  I get to interact with and share with the most brilliant young minds on this continent. I have seen Ubuntu in practice amongst our poorest communities.  I commit the rest of my career to the communities I work with.’