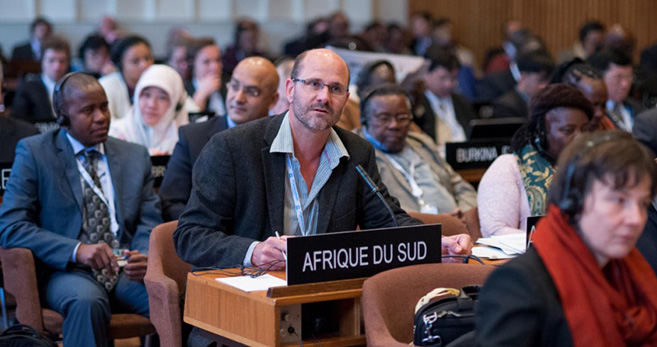 The African Centre for Global Change and Water Resources Research (ACGCWRR) at UKZN has been made a UNESCO Category 2 Water Centre following a decision at the 37th UNESCO General Conference held in Paris.

The Centre will be hosted on the Pietermaritzburg campus under the auspices of UNESCO through its International Hydrology Programme (IHP).

Category 2 Centres formed part of the discussion of the Science Commission at the Conference and was chaired by the Director-General of the South African Department of Science and Technology (DST), Dr Phil Mjwara.

The General Conference was also attended by the head of delegation from the Department of Water Affairs (DWA), Mr Mbangiseni Nepfumbada, and his colleague, Mr Ramogale Sekwele, and Professor Graham Jewitt from UKZN who has overseen the creation of a centre for water-related teaching, research and outreach at UKZN and together with DWA developed the proposal for hosting the UNESCO Category 2 Centre.

The relevance of the ACGCWRR is made clear in a forthcoming paper written by Jewitt and Mr Simphiwe Ngcobo, with input from Dr Michele Warburton and Mrs Sabine Stuart-Hill in the journal Current Opinion in Environmental Sustainability.

In the article they state that ‘the relationship between change which results from global drivers and its impact at a local scale is complex and dynamic, and local economic and social realities exacerbate vulnerability to global change.  In southern Africa, impacts of land use have a bigger impact on water resources than climate change and given the development focus of the region, this situation is likely to persist for the foreseeable future. Innovative policy responses from the region exist, however, the extent to which these have been implemented is limited’.

Jewitt said: ‘Global change is far more than climate change. It includes changes in population, land cover, ocean dynamics as well as climate change. All of these are already taking place and have a major impact on the water resources in southern Africa.

‘There is a huge need to investigate and understand these impacts, how they affect the people of this region and how we should best respond. However, there is a severe lack of scientific capacity to do so. So, just as important as investigating and understanding the impact of global change on our water resources is the training of a cohort of young scientists to do so. The Centre, through its partners and collaborators will address this through mentorship of recently graduated PhDs and the training of PhD and MScs from the region,’ said Jewitt.

UNESCO assessed South Africa’s state of readiness and found that it and UKZN met the requirements for hosting a UNESCO category 2 centre in the field of water management.  The approval process required endorsement from the continent and specific region and this was achieved at the 4th Regional Meeting in Tanzania of the IHP Africa National Committees and Focal Points on Water Science Policy and Governance in Africa.

The inclusion of “African” in the name signals the approval of other African member states.  The Centre has also been endorsed by the South African Cabinet.
The Centre will be hosted under the auspices of UNESCO and on behalf of the State, with Cabinet committing to provide seed funding for the Centre. Operation of the Centre will be guided through a Governing Board comprised of the State, UKZN, UNESCO and other appropriate institutions. The University will enter into a Memorandum of Agreement with the DWA on operational matters and DWA will also enter into an Agreement with UNESCO under which evaluation of the success of the Centre will be made.

This international endorsement of UKZN’s strengths in the field of hydrology and water resources management is significant in that it facilitates research and capacity development related to global change and water resources in Africa. The University will also collaborate with partner institutions in South Africa, especially those historically disadvantaged Universities that are key feeders of hydrologists and environmental scientists for post-graduate studies. As an African Centre, the Centre will operate in close collaboration with UNESCO Chairs and relevant research institutions and networks in Africa.

Speaking of the endorsement, Professor Albert Modi, Dean of the School of Agricultural, Earth and Environmental Sciences - where the Centre will be located – said: ‘We seek to be the best African University offering skills in Agricultural, Earth and Environmental Sciences as well as Human Geography through relevant teaching, research and community engagement that responds to the contemporary social and ecological dynamics in South Africa, Africa and the world. The ACGCWRR will contribute to this vision and we appreciate the vision and commitment that DWA and UNESCO have shown in supporting the establishment of the Centre at UKZN.’

In response to the confirmation of the award of this grant, the South African delegation thanked the South African National Committee for UNESCO IHP for support and in particular the IHP colleagues  from sub-Saharan Africa (Group VA) and the UNESCO IHP secretariat for facilitating the assessment process.