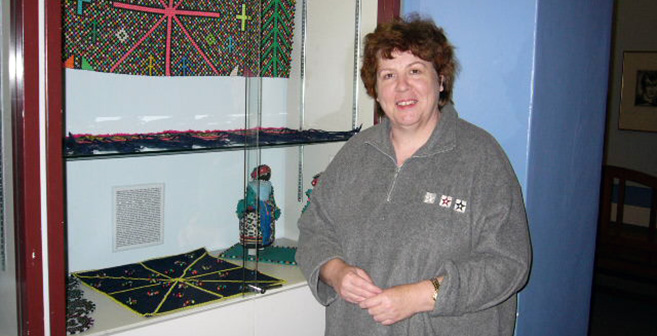 Ms Yvonne Winters at a beadwork exhibition she held at the Tatham Art Gallery in Pietermaritzburg in 2004.

UKZN will soon bid farewell to the Head of the Campbell Collections, Ms Yvonne Winters, who retires at the end of the year.

Winters’ journey at the University started in 1979 as a Museologist (museum curator). She has a Postgraduate Diploma in Museum Science from the University of Pretoria and is a PhD candidate (History of Art) at UKZN’s School of Arts.

Her PhD topic is: ‘A Social and Cultural Theoretical Appraisal and Contextualisation of the Visual and Symbolic Language of Beadwork and Dress from Southern KwaZulu-Natal’.

‘My Masters was also on the History of Art and dealt with aspects of indigenous aesthetics and narrative as expressed in the works of select Black South African artists such as Trevor Makhoba, Azaria Mbatha and Cyprian Shilakoe.  Both dissertations draw upon the museum holdings of UKZN’s Campbell Collections,’ said Winters.

Over the years, she has enjoyed interacting with highly talented artists and sculptors due to ‘the unusual perspective they have given on life and creativity’. Notable artists she has interacted with include Henry Mshololo and the late Trevor Makhoba’s students, Welcome Danca and Sibusiso Duma.

Winters cites curating an exhibition of the now 101-year-old artist-recorder of indigenous dress Barbara Tyrrell’s work as one of the highlights in her career. The exhibition at IZIKO – SA National Gallery in Cape Town coincided with the artist’s 100th birthday on 15 March last year and was curated along with a colleague, Mr Vusi Buthelezi.

Winters’ penchant for art, along with reading for her PhD, will keep her busy once she has retired. ‘I am determined to pursue my passion of painting dreams (yes those nighttime visions we all have). I have never quite succeeded but intend to “stay with it” until I succeed in creating the right atmosphere in paint, even if this means they have to be abstracts!

‘If I succeed at this, I may just have an exhibition or maybe not. I do not think it a good thing to have to commercialise art, it compromises one’s integrity.’

She added: ‘Having made this “high-handed”’ statement I hope the fates don’t bring me down to size and I have to sell paintings because inflation erodes my pension. I have just been looking at the projections and at the age of 85 the financial advisor is leaving blanks – so I had best not live as long as my mentor Barbara Tyrrell. By 101 there will be a “zero minus” balance!’

About the Campbell Collections:

Campbell, the daughter of the Natal sugar-magnate Sir Marshall Campbell, bequeathed her collections in 1949 to the University of Natal (now UKZN) which took over the administration in 1965 upon her death.

Her brother William Campbell donated the house, known as Muckleneuk – an imposing neo-Cape Dutch mansion on Durban’s Berea – as Public Trust to house his sister’s collections.

The Museum collections comprise contemporary African art and traditional ethnographic artefacts (including beadwork and woodwork and pottery) from all the indigenous cultures of southern Africa, but especially that of the Zulu, Bhaca and AbaMbo of KwaZulu-Natal.

Most distinctive of the museum are the 1 000 costume studies of all the indigenous peoples of southern Africa by Killie Campbell’s protégé Barbara Tyrrell.