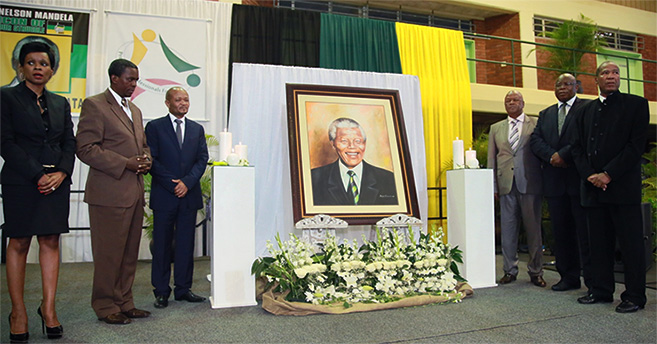 Tributes to Nelson Mandela at UKZN

The University of KwaZulu-Natal, the ANC and the Progressive Professionals Forum paid tribute to Nelson Rolihlahla Mandela at a Memorial Service at the Sports Centre on the Westville campus on Thursday 12 December.

Delivering the keynote address, Justice and Constitutional Development Minister Jeff Radebe said the Memorial Service at the University celebrated Mandela’s academic life. ‘Like many of us here, President Mandela sat in classes and lecture halls, thirsty for knowledge, thirsty for personal growth.’

Radebe acknowledged Mandela’s pro bono work as a lawyer and his efforts in the liberation movement. ‘That he became the servant of the people and a constant irritant to the Apartheid establishment was an early indication that apartheid was its own worst enemy.’

He paid tribute to Mandela’s belief in peace and reconciliation, ‘He was a true soldier, and it is only true soldiers that know the value of peace.’

Radebe urged all professionals to continue to uphold the legacy left by Mandela.’ ‘To all professionals, the clarion call has been made. ‘Mandela’s long walk has no statute of limitations.’

He acknowledged Mandela’s role as a global icon. ‘Apart from being our first President, Madiba was the President’s President.’

Vice-Chancellor and Principal of UKZN, Professor Malegapuru Makgoba, recalled his personal interactions with Mandela and acknowledged the impact the icon had on all South Africans.

‘Tata gave us an identity and a place in the world. Through his actions and conduct he symbolised Africa and Africans. He embodied all that was quintessentially African. He was the consummate African Prince with strong rural roots.’

He outlined Mandela’s longstanding relationship with the University including the awarding of honorary degrees from the former Universities of Natal and Durban-Westville; and the naming of the Nelson R Mandela Medical School of Medicine.

Makgoba acknowledged the importance of education for Mandela. ‘All of us knew how Tata valued education as a powerful force that drove individuals and national change. With education one could change one’s fortunes and one could change the fortunes of nations. Quoting Mandela, he said: ‘Education is the most powerful weapon which you could use to change the world.’

He concluded: ‘And it is in death he commands tremendous power and inspiration. That is the mark of a truly exceptional person, ie to be more powerful in death than in life. He is like no other and needs no comparison with anyone.

‘How many people in their rest would evoke so much hope, so much inspiration, so much love and so much forgiveness throughout the world? Only one man – our former President.’

Mchunu also noted the significance of hosting the Memorial Service at the Sports Centre on the Westville campus.  Following the unbanning of the African National Congress, the first ANC National Conference was held at the former University of Durban-Westville’s Sports Centre in July 1991. It was at this Conference that the ANC elected Nelson Mandela to succeed Oliver Tambo as President of the ANC.

He expressed gratitude on behalf of the African National Congress in KwaZulu-Natal to the University for hosting the event.

Messages of support and condolence were given by the South African Medical Association, the Black Lawyers Association, National Association of Democratic Lawyers and the Progressive Professional Forum.

The UKZN Tenors and Ithemba Chorus paid tribute to Madiba by singing Asimbonanga, which means ‘we have not seen him’. The song was written by Johnny Clegg during Mandela’s incarceration and is about Mandela and other struggle heroes. Clegg was given an Honorary Doctorate by UKZN in April, 2013.