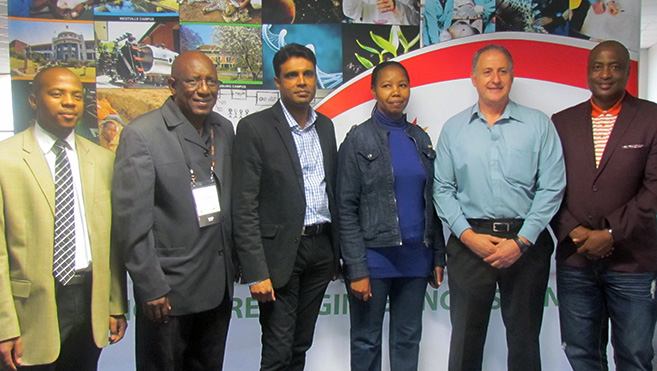 The research involves implementing several pilot projects at Edgewood and other UKZN campuses to investigate the effect and impact of hot water usage. Of a total of 11 residences, three were fitted with heat pumps while the remainder were left with electric boilers but the heads on the showers were changed from conventional to energy efficient units.

Diana delivered a presentation on his research to the delegation. The research showed significant Capital Expenditure (CAPEX) savings through usage of the innovative off-peak hot water thermal storage system. Diana's research showed that further co-ordination of such operations with the prevailing electrical tariff and other energy saving measures resulted in Operational Expenditure (OPEX) savings. The system also has potential for savings for both formal residential and informal settlements.

‘The research involves a new, innovative approach towards understanding  and co-ordinating every day usage, usage patterns  and operations with the prevailing utility tariff structures whilst making optimum use of available technology,’ said Diana.

After the presentation, the delegation viewed the technology used at the Beechwood Residence at Edgewood campus. They were extremely impressed with what they saw.

‘THRIP funding realised good value in that it allowed an alternative and novel approach to be achieved which resulted in the IDC offering to support a pilot project in the residential sector through the formation of a spin-off company,’ said Diana. ‘In addition, UKZN will benefit from the research through improved hot water services to all its residences and significantly lower operational costs. This project covers many aspects of the innovation system value chain.’

Chief Director: Innovation and Technology Unit at DTI, Ms Nonkululeko Shinga, said: ‘The energy efficient off-peak thermal storage water system project which is piloted at the Edgewood campus is a true example of an innovation with enhanced impact on social upliftment. This THRIP-supported project brings industry, academia and government together to focus on the energy conversation challenge. The Department of Industry is proud to be associated with it.’