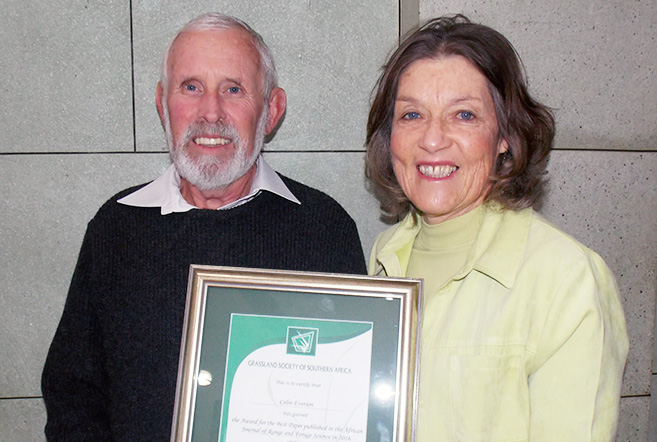 Professor Colin Everson of the Centre for Water Resource Research (CWRR) has been awarded a Partnerships for Enhanced Engagement in Research (PEER) Science grant by the United States Agency for International Development (USAID), in partnership with the National Science Foundation (NSF).

The grants are awarded annually to scientists in developing countries who submit winning proposals applying for funds in order to conduct research on topics relevant to USAID. Of the hundreds of applications submitted by the 87 eligible countries, 53 grants were awarded world-wide and only four grants were awarded to South African researchers, one of whom is Everson.

Everson’s research focuses on cosmic ray moisture probes, instruments which measure soil moisture and have the potential to provide hydro-meteorologists with new methods of evaluating surface soil water, allowing for water resource managers, engineers, and agriculturalists to monitor the relationship between the ground and atmosphere.

According to Everson, this technology has the potential for broad application, for example in water demand forecasting, irrigation schedules and harvest indices as well as promising to improve the utilisation of irrigation water, especially in a water-scarce region such as South Africa.

‘In future, the technology, which uses naturally-occurring cosmic rays for sensing soil moisture, could allow, for example, a sugarcane farmer to estimate the bio-mass of a sugarcane crop through the measurement of thermal neutrons using these probes,’ says Everson, referring to just one of the enormous benefits of research into the application of this technology.

The award of this grant opens up the opportunity for this long-term research to move forward and impact on water-usage throughout South Africa.  The cosmic ray probes, which measure data over 34ha, can also be utilised for predictive weather and climate models by measuring soil-water content and providing suitable observations where they have previously been lacking.

Additionally, this project should improve the quality of soil moisture data that feed into the South African Flash Flood Guidance System, which provides alerts to the public based on current and predicted rainfall.

This internationally-recognised project also forms part of the international COSMOS network, which measures soil moisture on the horizontal scale of hectometres and depths of decimetres using cosmic-ray neutrons.

Currently there is only one COSMOS site on the African continent, however Everson’s project envisions the addition of six or seven sites in South Africa alone thanks to the award of this grant as well as support from the National Research Foundation’s (NRF) Research Infrastructure Support Programmes (RISP).