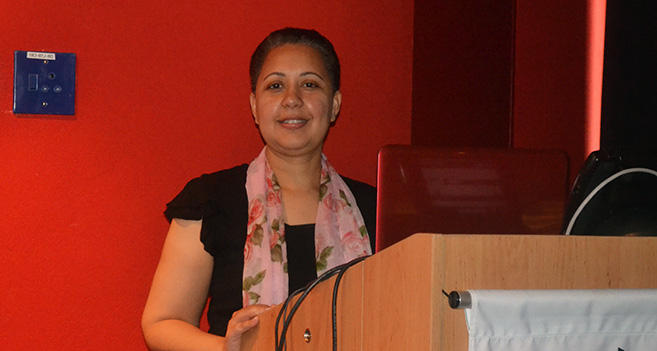 Johns’ “talk” was organised by the College of Health Science’s Women in Leadership and Leverage (WILL) committee, an organisation that aims to empower young women in academia.

Johns said her struggle against breast cancer had not been an easy one, but she overcame it all with the help and support from family, friends and hand-picked doctors she could trust.

A registered Counselling Psychologist and a Lecturer on the Howard College campus, Johns has been in remission for nine years.

At the age of 32, a diagnosis of breast cancer challenged her to reflect on her life and she found that sharing experiences with others in similar circumstances yielded invaluable knowledge and support.

Johns firmly believes her professional training and self-resilience provided her with the tools to cope with the management and treatment of her cancer.

A nipple discharge compelled her to conduct a breast self-examination. With the support and encouragement of her two cousins, she went to seek advice from her doctor and provided a discharge sample and underwent an ultrasound. Both tests yielded a negative result for cancer.

She was then advised to undergo a mammogram, the results of which indicated Ductal Carcinoma in Situ (DCIS).

She went through the tests on her own not wanting her parents to be frightened and alarmed until she knew the diagnosis.

The first surgical procedure she underwent was a lumpectomy. After the surgery and confirmation of DCIS, she was advised that she required a mastectomy. With the permission of her surgeon, she decided to wait for two days before she had the mastectomy. She needed to spend time with her parents, family and friends to explain the reasons for the procedure.

Having disclosed to her family and friends, they reacted differently; there was surprise, disbelief, avoidance and numbness. Some even asked: ‘How can you do this to us?’ Johns realised that the cancer was not only affecting her but her entire family. Though it was a difficult time, she said: ‘Family and friends had to understand that I had to make these decisions on my own.’

She felt she was not fully prepared for the surgery and knew it would be emotionally challenging for her. One of her coping strategies was to document the process by taking photographs of her breasts before and after the mastectomy.

Johns also stated she made a decision to select her medical team including an Oncologist.

She realised knowledge is power and for her to beat cancer she needed to know more. She had done some research on breast cancer before the official diagnoses and has continually educated herself about her cancer and her medical needs.

Her treatment included adjuvant hormonal therapy. After 18 months, Johns and her oncologist decided to stop treatment due to the side-effects. Some of the side-effects were early menopause at 33, weight gain and memory loss. Throughout the treatment process she documented the changes in her life as a woman and as an academic.

For three years, she did not enlist the help of a formal support group before joining the C-Sisters in 2007, a group of women who decided to host informative workshops on breast cancer.

The C-Sisters, due to their personal experiences with breast cancer, acknowledge there was a need for practical information. They decided to write a comprehensive book with help from relevant medical professionals and breast cancer survivors. Johns was one of the contributors to the book and was part of the editorial team. The first book specifically focused on KwaZulu-Natal resources and was published in 2010.

In 2011, Johns played an instrumental role in having the book translated into isiZulu and in publishing a national edition of the book.

She has been a guest speaker for several cancer support groups, done radio interviews about her experience and facilitated training workshops at CANSA.

Johns is currently registered for her PhD in the Discipline of Psychology. Due to her personal experience with breast cancer, her PhD will explore women’s narratives on the breast cancer experience.