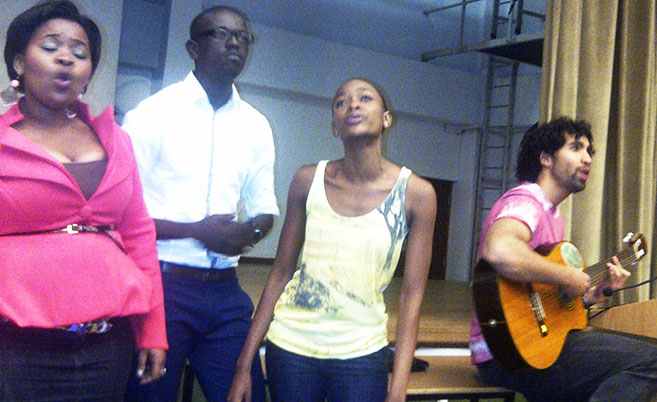 Postgraduate Certificate in Education (PGCE) music students were given a platform to display what they would take to schools as future educators when they performed in a production titled: “Taking Musical Talent to Schools”.

Their performances were assessed for their practical examinations during the production put on at the Margaret Martin Lecture Theatre on the Edgewood campus. The production looked at South African school choral music which focuses on different types of singing styles such as opera, pop and traditional African music.

The students were divided into three groups whose vocal training ranged from opera to jazz/pop and to African music.

‘Since these students have studied music pedagogy they have gained the capacity to teach music in schools. They are indeed taking their music talent to schools where they will train and nurture young growing singing voices with the aim of developing music talent,’ explained Dr Yolisa Nompula, Head of Arts Education at UKZN.

One of the highlights was a vocal performance by the opera students of O Sole Mio, a globally known Neapolitan song composed by Eduard di Capua and lyrics written by Giovanni Capurro.

Asked about how the creation and execution of the production would assist the aspirant educators, Nompula said: ‘The students enjoy performing for such big audiences so they were given an opportunity to participate in the production to help them develop team spirit and leadership skills. It was a platform for them to share their musical talent, to develop self-confidence, and a sense of belonging and pride as future music teachers.’

Nompula hopes the students will be accompanied by the KZN Philharmonic Orchestra next year.