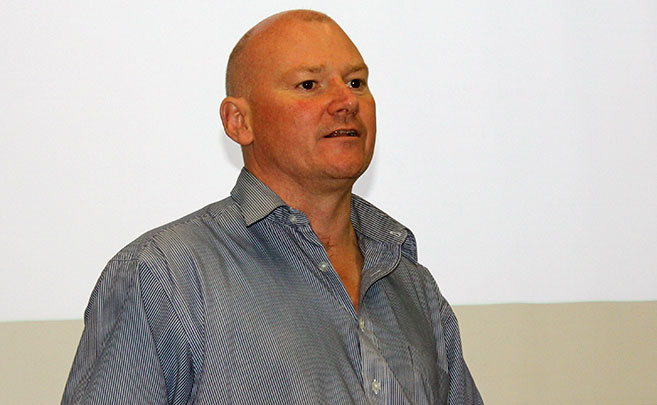 The Classics Programme within the School of Religion, Philosophy and Classics (SRPC) recently hosted the visit of Professor Matthew Trundle from the Department of Classics at the University of Auckland in New Zealand.

Trundle presented guest lectures to UKZN staff and students on: “The Archaeology and History of the Great Sanctuary of Poseidon at Isthmia, and Coinage and the Transformation of Greek Religion”.

His first Lecture explored the ways in which the introduction and spread of coinage shaped and transformed the religious lives of Greek sanctuaries, religious communities and religious practices from the sixth to the fourth centuries BC.

‘Just as coinage transformed the military and politics, and brought with it both professionals and democratisation, so too coins facilitated larger, more coordinated festivals and the ability of sanctuaries to top-slice and redistribute resources more effectively, or to store assets from the sale of donations or sacrificed animal skins for longer periods of time,’ said Trundle.

He also explained that coinage replaced prestige items used in rituals and sacrifice, pointing out inscriptions from sanctuaries such as Eleusis which show how coins functioned as markers of value in the accounts of religious activities.

‘Coins enabled mobility in a world in which land had once provided status and prestige and so facilitated new cults in urban environments, themselves a product of more monetised economies.’   The discussion showed how traditional religious practices incorporated and used coins and the effects this had on ancient Greek religious practice.

In his second Lecture, Trundle looked at “Isthmia”, one of the four great Panhellenic games sites in ancient Greece. He discussed its geographic location at the Isthmus near Corinth which provided easy access to and from all parts of the Greek world. The Isthmian Games were probably the best attended of any of the Greek athletic festivals, including Olympia, in the Classical period.

‘It was a place of great strategic importance on the main road from the Peloponnese to Athens and central Greece.  As a result Isthmia enjoyed great prestige throughout antiquity and especially under the Roman Empire.  The site has only been excavated since the 1950s.’

His Lecture went on to explore these excavations and what they have revealed about the site and the importance of the sanctuary.  Both his lectures were well attended and well-received by staff and students.