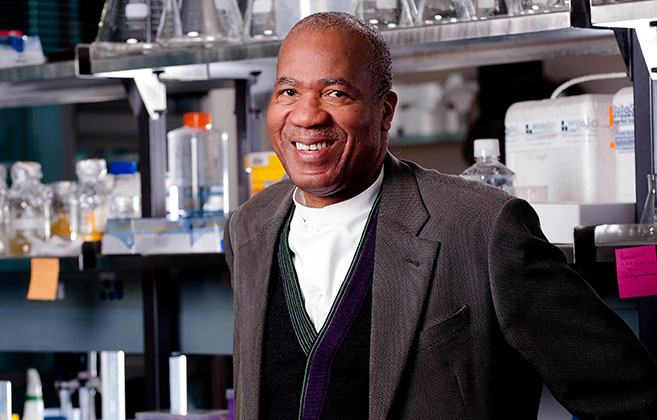 The MRC President’s Award was presented to Makgoba by the Minister of Health Dr Aaron Motsoaledi during a gala dinner in Cape Town.

‘The MRC congratulates Professor Makgoba on being the first recipient of the MRC President’s Award, a prestigious new award created to recognise exceptional contributions to medical research in South Africa,’ said Professor Mike Sathekge, Chairman of the MRC Board.

UKZN’s Chair of Council Mrs Phumla Mnganga said Makgoba’s passion and contribution to research and indeed medical research were widely recognised. ‘His contributions in advancing the research endeavour at UKZN are significant. He challenged conventional paradigms in academia and paved the way to transform the academic landscape opening opportunities for young black scientists to engage in research and scientific studies both here in South Africa and abroad.’

The citation captured this contribution: ‘Professor Makgoba has made an outstanding and lasting contribution to South African medical science, holding up and enhancing the reputation of science in this country and in the international community, and encouraging and supporting young scientists.

‘He continues this service now as Vice-President for Planning and Review of the Paris-based International Council for Science. Professor Makgoba’s contributions to medical science are vast and numerous. He served as President of the MRC during the difficult years of AIDS denialism in South Africa. Under Professor Makgoba’s guidance, the MRC became a considerably larger and more efficient institution, ensuring the relevance for South Africa of many of the research programmes supported and fostered by the MRC.

‘He has insisted on the highest ethical standards in the conduct of medical research and has had a major influence in the transformation of the South African science landscape.’

Mnganga added: ‘I recall his bold public stand in addressing the AIDS denialism in our country and has at times stood for scientific integrity against considerable interference… It is his clarity and forthrightness in dealing with these and other issues that have done much to guard the reputation of South African science and medicine.

‘I congratulate Professor Makgoba for his bold leadership, his vision and his fortitude in enriching our country’s research agenda.’