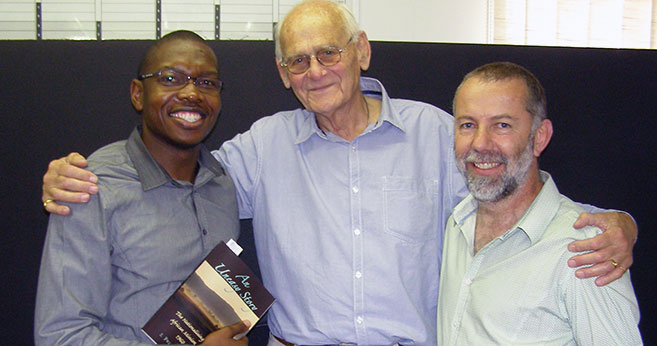 From left: Head of the Department of Rural Health Dr Mosa Moshabela with Dr Ronald Ingles and the Director of the Centre for Rural Health, Dr Bernhard Gaede.

Ingles, who had been based in the rural All Saints Mission hospital in the former Transkei, recounted his experiences to an audience comprising mainly rural health and public health experts.

Having qualified in the United Kingdom as a Medical Doctor, Ingles served in the Royal Air Force before arriving in South Africa in 1958 to assist in the All Saints Mission Hospital. His book focuses on the handover of the All Saints Hospital, one of 109 in the country, to the government of the time and the challenges experienced delivering healthcare in a rural setting.

His presentation which recounted the typical life of a rural doctor about 50 years ago, is relevant to current medical doctors in country areas. Ingle said: ‘A typical week in the life of a rural doctor involved the pressure of clinical work, numerous interruptions, balancing outpatients and ward work, and restricted referral options, which meant that you had to do a lot yourself.

‘One’s skillfulness in many branches of medicine, far from dwindling away, increases. Medicine is a determined and sympathetic practice of the right principles adapted to the total circumstances of your patient and we remind ourselves that we must do the best under the circumstances, not hopelessly, but with ingenuity and imagination, always of course trying to improve the circumstances.’

Ingles recalled an example of when he had to be re-skilled to deal with life in the country. At the hospital, he treated many babies who presented with malnutrition and Kwashiorkor. The infants were admitted and fed until their weight improved and then discharged only to relapse. He soon realised that ‘living and working within another culture meant re-thinking yourself as much as them’.

The recurring illness led to the establishment of Kwazondle Uphile — a Nutrition Rehab Unit (NRU) — away from hospital wards. Here, mothers were educated on improved nutrition for their children, changing the mindset of treating the ill to educating as a means of prevention.

Ingles said the key requirements for success in delivering healthcare in a rural setting included supportive teamwork, working with the local leadership, expert clinical skills in order to improve clinical outcomes in a poor resource setting, resourcefulness and generalism - described as meeting as many clinical challenges as possible including crossing the boundaries of many specialities.

Ingles recalled that at the hand over of the All Saints Hospital to the Transkei Health Department he had said: ‘As this is done, I make this plea: Where our skills and our resources may be short, our greatest asset is in people – their inborn capacity to respond to leadership which is dedicated to their needs. Wherever and whenever man is hard pressed, the way forward is to draw on this resource by consultation at all levels, from the highest to the lowest. This consultation is a priceless resource upon which any great task may be built up with hope.’

‘Ingles’ presentation highlighted the challenges facing rural hospitals and public healthcare in general, even today,’ said public health scientist Dr Paula Diab. ‘Rather than forget the past, we should be reflecting on the experiences of older colleagues and learning from past successes and failures.’

* Ingles left the All Saints hospital to join the Transkei Health Department in Umtata where he promoted primary health care and was an invaluable support to many doctors working in Transkei at the time. He later joined the Department of Family Medicine at MEDUNSA and retired from clinical work in 1992.