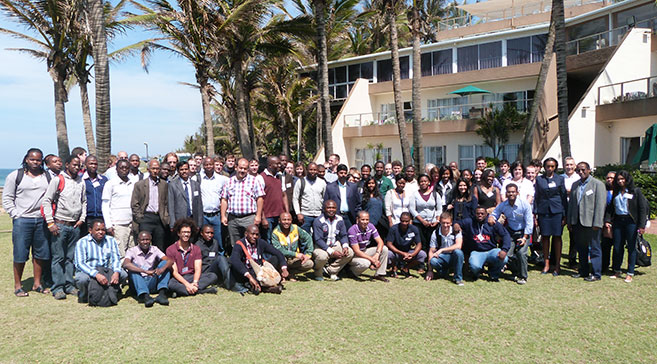 Attendees at the 29th Annual Conference of the South African Society for Atmospheric Sciences.

The 29th Annual Conference of the South African Society for Atmospheric Sciences kicked off with the first Atmospheric Remote Sensing Education and Training (ATM-Reset) Workshop hosted by UKZN’s  School of Chemistry and Physics.

Attended by more than 43 students and researchers, the programme included presentations from renowned international speakers.

Delegates were also treated to a lecture on: “High Power Radar Probing of Atmosphere and Ionosphere”, by Professor Balarama Rao of the National Remote Sensing Agency in India, assisted by Dr Nkanyiso Mbatha of the South African National Space Agency (SANSA). The workshop ended with a presentation by Professor Hassan Bencherif of Reunion assisted by Mr Jeremiah Ogunniyi of UKZN.

The Workshop was followed by the 29th Annual Conference of the South African Society for Atmospheric Sciences, which attracted 120 participants from various countries, including 68 postgraduate students. The main theme of the Conference, held for the first time in the Durban area, was: “Towards Quantifying and Qualifying the Earth’s Atmosphere”.

The keynote address, delivered by Dr Thierry Lebel, Director of the Institute for Research Development in Grenbole, France, was titled: “The West African Monsoon: Contribution of the AMMA Multidisciplinary Programme to the Study of a Regional Climate System”.  Lebel is the Project Leader of one of the European programme frameworks studying African monsoon and climate impacts.

Review Chair Dr Raghavendra Kumar said the Conference had produced about 200 pages of electronic conference proceedings which were now accredited by the Department of Education in South Africa. ‘The articles are of high quality and have been peer-reviewed by relevant experts,’ he said.