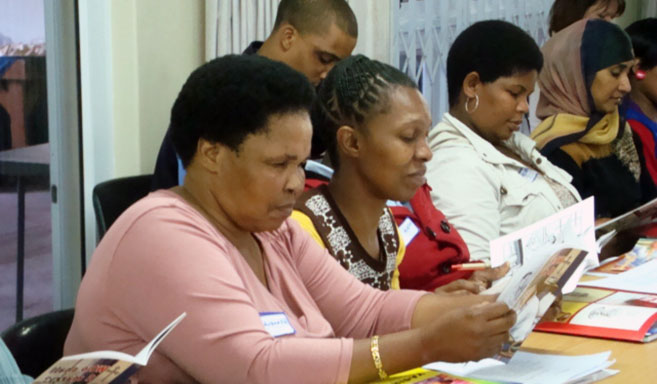 NRP Donates Books to the Reading Association of South Africa

New Readers Publishers (NRP) based at the Centre for Adult Education recently donated books as gifts for speakers at the 8th Annual Reading Association of South Africa (RASA) conference.

Founding members of the KwaZulu-Natal branch of RASA, NRP Project Manager, Ms Sonya Keyser, and former colleague, Dr Elda Lyster, viewed the book donation as an opportunity to showcase the work of NRP to promote reading.

Ten gift sets each containing ten books were given to the conference speakers. Each set consisted of English, isiZulu, Sepedi, Sesotho and Afrikaans readers and a book of teachers' resource material.

‘Every year one of the provincial branches of RASA hosts the annual RASA conference and this year it was in Gauteng,’ said Keyser.

‘RASA is a non-profit, volunteer-based organisation which meant RASA Gauteng relied on donations and sponsorships to assist them in hosting the annual conference. The mission of both RASA and the NRP is to promote reading and writing. NRP staff continue to volunteer their time and donate books where appropriate.’

Keyser said NRP was currently involved in running a series of workshops under the auspices of RASA KZN on encouraging and motivating adults to read. Workshops are scheduled for Edendale and Newcastle before the end of the year.

NRP plans to work with educators from farm schools and NGOs in rural areas in the Eastern Cape early next year.