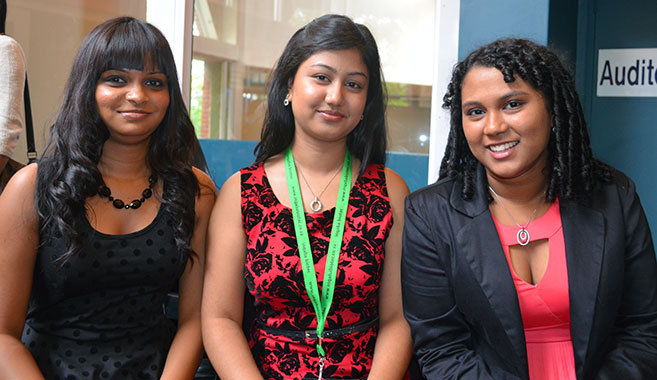 Microbiology and Biotechnology are in a very healthy state in KwaZulu-Natal, according to Professor Bala Pillay, Dean of Teaching and Learning in UKZN’s College of Agriculture, Engineering and Science.

‘These are the leading disciplines that will make the greatest contributions to the challenges facing our continent in the areas of water, food, agriculture, human health, and the environment,’ he said.

Pillay was addressing the 26th annual Symposium of the Society for Microbiology in KwaZulu-Natal (SASM-KZN) hosted by UKZN’s Discipline of Microbiology at UKZN’s Innovation Centre on the Westville campus.

The annual Symposium gives young researchers at Honours and BTech level an opportunity to showcase their research findings among their peers in the province.

Pillay, who is a trained Microbiologist, said the KZN Symposium was the most successful regional conference of the South African Society of Microbiologists.  ‘We have sustained this conference for over 26 years.  It is a great platform for young scientists at the Honours and BTech level from the three tertiary institutions in the province, namely, UKZN, the Durban University of Technology (DUT) and the University of Zululand. ’

Pillay said that the Symposium had become highly competitive.  ‘Even though this Symposium is for entry-level scientists, we find lots of potential for innovation,’ he said.

The keynote address was delivered by Ms Elisabeth Freeman, President and CEO of the American organisation, the International Centre of Professional Development (ICPD), which aims to facilitate access to careers.  Freeman spoke on: “Industry Mentoring:  A Catalyst for Life Science Innovation in Africa”.

Freeman posed the following interactive question to the delegates:  ‘What is the one way that you contribute positively to your community?  What are you good at?  What obstacles are stopping you?’ She stressed the important role mentors can play in developing young talent, and removing such obstacles.

The 26th Symposium saw 66 young scientists present a diverse range of research, which Pillay said was both cutting edge and applied research that was relevant to KwaZulu-Natal.

After a successful day of presentations, prizes were awarded to the top three presenters in each of two venues. The Microbiology Department, UKZN (Westville) made a clean sweep of the awards in the first venue - Ms Nicole du Plooy won first prize with Ms Lekita Singh second and Mr Joash Govindsamy third.  In the second venue, Ms Shanice Naidoo of DUT was the winner with Ms Carla Dalais also of DUT second and Ms Varnika Singh (UKZN-Genetics) third.

Academic Leader for Biotechnology in the School of Life Sciences on the Westville campus, Professor Ade Olaniran, gave a warm vote of thanks to his organising committee as well as paying tribute to the students’ supervisors ‘who continue to conceptualise and sustain great research ideas’.