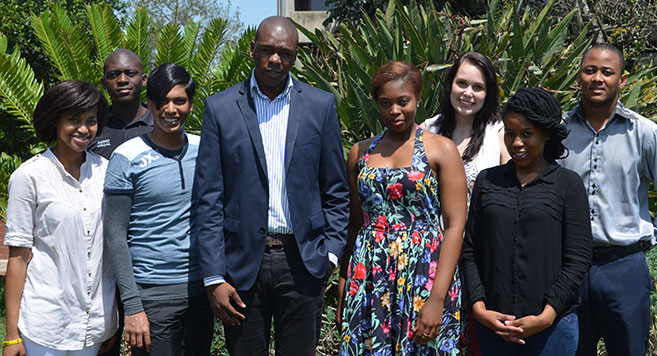 Law academic Mr Khulekani Zondi (centre) and law students who are part of the team working on a bilingual glossary of legal terms.

UKZN’s School of Law is creating a bilingual glossary of legal terms to assist students from disadvantaged backgrounds who struggle to understand concepts mainly because of language barriers.

The aim of the handy reference tool is to ease the understanding of concepts introduced at a first year level to English and isiZulu-speaking students by providing them with definitions of legal terms in both languages.

The first edition, hopefully available for use by the class of 2014, will contain terms relevant to following areas of law:

Maritime Economics and Law Lecturer Mr Khulekani Zondi, who heads the project, said the new bilingual glossary would be more comprehensive than anything currently available.

‘Research has revealed that in most cases students conceptualize in their mother tongue and yet are expected to convey the answers in English, which to some is a second or third language. There is thus a need for a tool which breaks the lingual barriers to understanding in teaching and learning settings,’ said Zondi.

‘Research revealed that most students judge one another on the basis their fluency in English thus creating a burdensome onus and a stigma for those who might not understand a particular term that appears during the course. This makes it difficult for such students to ask the lecturer to explain a particular term.’

For research purposes, Zondi works with a team of students. Second-year students identify terms they perceived as difficult in the introductory modules to the law degree ie Introduction to law and Foundations of South African law while their third year colleagues provide the English definitions of the terms identified.

Final year and masters students assist in providing translation from English to IsiZulu. Other team members are responsible for the compilation of a database of the identified, defined and translated terms.

The language development office recently organised a verification workshop which consisted of a variety of experts from bodies such as the Department of Arts and culture, the office of the Provincial Legislature, the Pan South African Language Board and the South Africa Norway Tertiary Education Development Programme (SANTED).