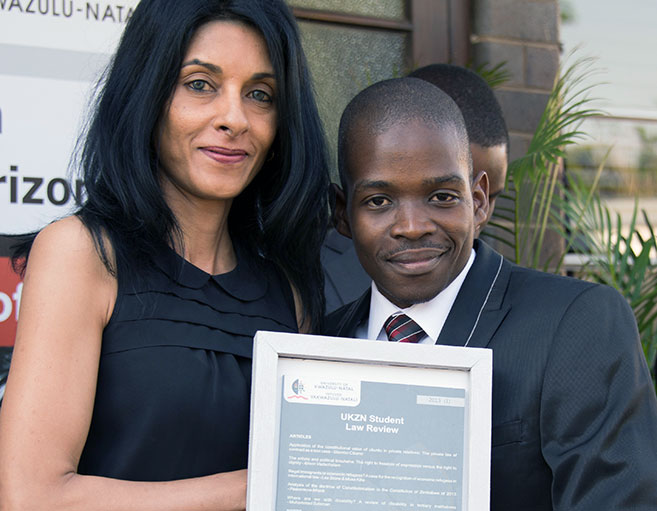 The Dean and Head of UKZN’s School of Law, Professor Managay Reddi, and law student Mr Ntokozo Qwabe at the launch of the UKZN Student Law Review Journal.

UKZN final year Law student Mr Ntokozo Qwabe (23) is the 2013 recipient of the KwaZulu-Natal Rhodes Scholarship to further his studies at Oxford University in England.

The scholarship is awarded annually to intellectually gifted and motivated young people with a genuine commitment to serve society. The challenges of growing up in Eshowe in a family of 13 children, all dependent on the sole income of their father who was employed as a caretaker at a high school in Durban, inspired Qwabe to study law at UKZN.

‘When I started my LLB in 2007 at the age of 16, I faced severe financial and socio-economic difficulties which culminated in me dropping out of university and being forced to work as a cashier at Checkers Supermarket from 2008 to 2010.

‘I returned to UKZN in 2010, working hard over the years to achieve 29 distinctions, 20 Certificates of Merit and six Dean’s Commendations among other awards. I am proud of being able to bounce back from a very challenging situation,’ said Qwabe.

For Qwabe studying law is not only about empowering himself but also empowering those around him to think of ways to respond to the issues facing the country. This led to his co-founding of the UKZN Student Law Review Journal which features articles, case notes and book reviews written by UKZN undergraduate and postgraduate law students.

Now Editor-in-Chief of the journal, Qwabe said:  ‘My achievements show that regardless of the disadvantages students may be suffering, there is no excuse not to go out there and use their potential to the full. I am aware that there are fellow students who like myself face enormous socio-economic challenges. I hope my example inspires them to realise that nothing is impossible.’

Qwabe also founded and Chairs the Rural Students’ Society, is on the executive committees of the Black Management Forum and the Students for Law and Social Justice, and was selected to represent UKZN at the international African Human Rights Moot Court Competition in which the University is ranked 10th.

Qwabe’s long-term goals include practising as an Advocate in Public Law, and ultimately following in the footsteps of his role model, the late former Chief Justice Pius Langa, and becoming a Judge at the Constitutional Court.

His immediate academic plans include using his Rhodes Scholarship to study for two masters degrees.

In his first year, he will study towards a BCL in Public Law and explore courses such as Comparative Public Law, Comparative Human Rights Law, International Economic Law and a course in Jurisprudence and Political Theory. In the second year, he plans to pursue an MSc in Global Governance and Diplomacy.

‘I am wary of being confined to Law as it is a limited tool for change. There are various community development projects I will be involved in and would like to see blossoming,’ he said.

Before leaving for Oxford in September next year, Qwabe will do his articles as a candidate attorney at the law firm, Webber Wentzel.

Dean and Head of the Law School, Professor Managay Reddi said:  ‘Mr Qwabe’s achievement has been possible through his dedication to his law studies and to participating in student organisations and activities aimed at the upliftment and promotion of the development of our country. The School of Law has been an integral partner in supporting students like Mr Qwabe who are determined to make a difference to the lives of all South Africans by inspiring young people to aspire to great heights. Mr Qwabe’s determination to make a difference, despite the challenges he faced, has earned him his just rewards. We wish him every success in his studies at Oxford and in all his future endeavours.’