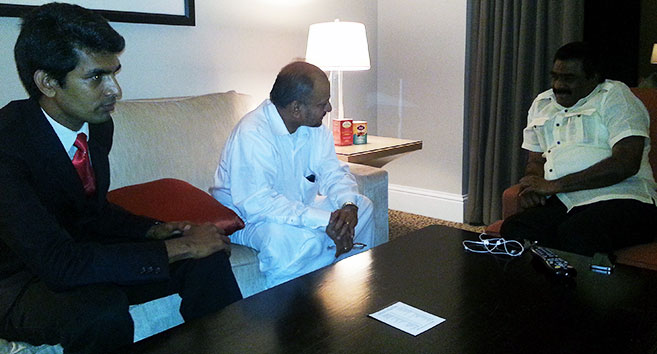 Humanities post-doctoral Fellow Dr Gunasekharan Dharmaraja was recently invited to New York by one of India’s television channels WIN TV, to discuss the future of Tamil Eelam, the homeland of Tamil people who live in Ceylon Island.

In the interview Dharmaraja said: ‘I am really happy to be interviewed by WIN TV. More than being interviewed, I personally feel privileged to contribute towards the freedom of Tamil Eelam.

‘Palestine, Tibet and Tamil Eelam are not simply the demand for separate nations, but they are the yardsticks of humanity. Fighting and speaking for Tamil Eelam, Palestine and Tibet make you feel like a human being who is concerned about the fundamental rights of humanity.’

During the TV plenary session he was in discussion with the Prime Minster of the Transnational Government of Tamil Eelam, Mr Visvanathan Rudrakumaran, and the President of the Indian People’s party, Dr T. Devanathan.

Dharmaraja said: ‘The plenary session discussed the various ways of carrying forward the struggle to get back the homeland which has been occupied by Sri Lanka. It plans to bring the genocide by forces of the present Sri Lankan government into the limelight.

‘It further requests people everywhere, intellectuals and the international society to join the Tamil people in their struggle and help them to save the innocents who are suffering in the concentration camps in Sri Lanka and also enhance their struggle to reach the final destination, Tamil Eelam.’

He pointed out that sessions of this nature were important as they demonstrated the determination of Tamil Eelam.